When Eli was three years old, he was diagnosed with neurofibromatosis type 1, something we had never heard of before. That’s also when we found out about his first brain tumor. We very quickly learned that there isn’t a cure or even a way to manage this tumor producing disorder. It attacks the nervous system and nerve endings and causes many neurological deficits as a result.

Since his initial diagnosis, he has had to undergo two different chemotherapy regimens. The first began when he was six years old and consisted of weekly infusions for a year and a half which successfully saved his vision and kept him from going blind. However, it caused him neuropathy that required weekly physical therapy and the need to wear custom orthotics in his shoes (which he still needs to this day). It was also during this therapy that his second brain tumor developed; this one in the brainstem. The growth of this tumor compromised the third ventricle in his brain which prevented the flow of his cerebral spinal fluid and caused hydrocephalus to develop. This required brain surgery to correct or it would kill him.

Just one short month later (a month before his 9th birthday), he was put on his second round of chemo for a year to try and stop/slow the growth of his brainstem tumor. Unfortunately, it was unsuccessful. In fact, it was so unsuccessful, that while on that therapy, four more tumors developed. A third in his brain and three in his spine!!! What makes all of this even more challenging is that not a single one of his tumors is located in an area where they can be surgically removed – or even biopsied for that matter – because they are all located in very crucial parts of the brain. So crucial that even a biopsy could potentially leave him paralyzed.

For more than six years straight, Eli has had to go every three months for an MRI of his brain.  For a little over the past year, he has had a brain and spine MRI every three months, which lasts almost 3 hours every time. Can you believe he does this UNSEDATED!!! He’s truly a rock star to say the very least!!!

However, we feel a little anxiety over his next scan, which will be coming up in the next couple of months. If these tumors, one in particular, reveals any growth at all, he will yet AGAIN be put on a third round of chemotherapy. If this therapy should also fail, he will need to undergo his second brain surgery to try to kill one particular tumor with a laser beam. I’m sure that sounds great, however, this procedure (in his pediatric neurosurgeon’s words) could leave him neurologically impaired… to what degree, we can not say or predict!

As you can imagine, if we do not get the news we are praying for, my heart will LITERALLY feel like it’s been ripped from my chest and I’m not sure I’ll be able to breathe!

School is an additional struggle. He’s had neuropsychological testing that shows he has a slight delay in learning. In kindergarten, he had to do speech therapy and up until this year, he’s needed to participate in a help reading class, and also has had difficulties with math. Missing so much school over the years for chemotherapy, MRI’s, physical therapy, eye exams and all of his other specialty doctors visits hasn’t helped him any, either.

Thanks for taking the time to read! 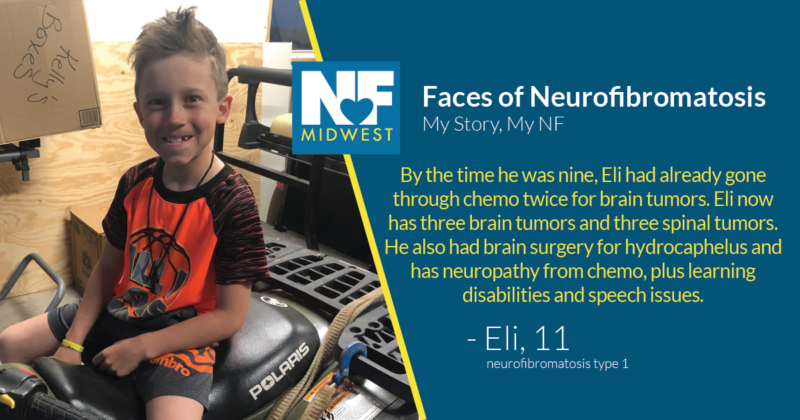