Silas – A Face of NF

My sixteen-year-old son began getting café au lait spots at two months old.  Our pediatrician at the time gave us a very grave description of neurofibromatosis.  My husband and I were in complete shock, disbelief, and crushed with the information that she had given us.  At that point, he only had the CALS, so we were to wait and see if anything else began to manifest. When he was about 2, we finally got health insurance and an appointment with a local dermatologist that confirmed NF1.  Although I knew that the freckling that he had developed meant that he had NF, the confirmation coming from the doctor was so hard to hear. It was off to an NF specialist from there.  Luckily, we only lived a couple of hours from Chicago, so that’s where we started.

Through the years, we have learned that Silas has lisch nodules, an optic glioma (which has not impacted his vision), numerous subcutaneous neurofibromas, and most recently he had a plexiform neurofibroma give us a scare with its sudden growth. He must  have an inch lift built into his shoe because of a significant leg discrepancy.  The neurofibromas in that leg have caused that leg to grow.  He had a procedure to stop the growth of that leg, so now we just hope that he has enough growth left for the other leg to catch up a bit.

Silas has gotten much better with his anxiety about going to doctors and having MRIs.  A trip to Portillo’s afterwards is always helpful!  Silas likes playing baseball in the neighborhood, watching his Cubs, playing video games, hanging out with friends, and looks forward to going to Camp New Friends every year.  He amazes me with his ability to take it all in stride. His diagnosis has brought our family closer in a way that I never thought was possible.  His courage is infectious and has made us all stronger as individuals. 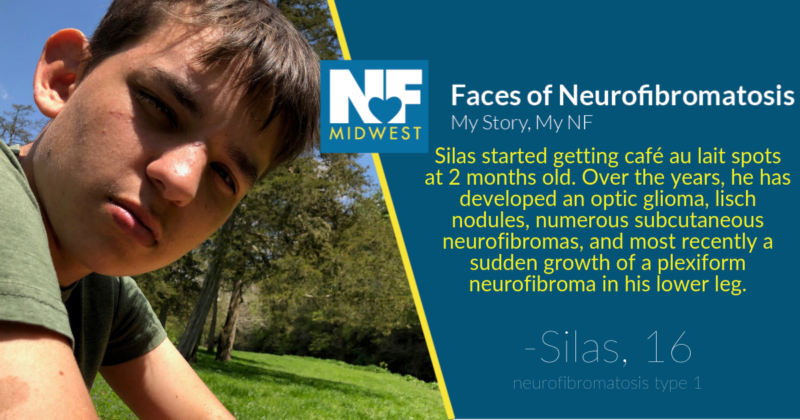