Karissa- A Face of NF

My story may be a little long, but sometimes that’s the way it is with NF. It’s the disorder that for some just keeps on “giving” and for all the questions and concerns we have it seems like there are always more questions.

First, I have a seizure disorder. I had many different symptoms of this including a scary episode in kindergarten in which I stopped breathing for a short time. Still it took until I was in seventh grade for doctors to recognize that I was definitely having frequent seizures…despite several EEGs to test for them.

When I was six we discovered that I had what is called a plexiform tumor in my neck that extended into the spinal cord, compressing it. Without surgery, I could have possibly been paralyzed in the future. This type of tumor generally cannot be removed because, though it is benign, it wraps around and intertwines with nerves and arteries. It can only be “debulked”, after which it may continue growing rapidly, slowly or not at all or start up at some future date. A neurosurgeon, orthopedic surgeon, and ear, nose, and throat surgeon worked for over 12 hours to get the tumor out of the spinal area with the hopes of then “debulking” the tumor. Due to great blood loss they were only able to remove the tumor from the spinal area. To shore up the damage to the bone they took some of my hip bone and fused my neck from occiput to C7 and put me in a special brace for 3 months. This “fusion” makes me unable to move my neck from side to side or up and down.

When I was ten it was decided that it was time to try debulking the tumor because it was eroding the bones in the front of my neck. At that time surgeons debulked it and used cadaver bone to strengthen and further fuse the neck. I was put in a halo device and in the ICU on ventilator for six days. The fusion didn’t take well enough and I had two more surgeries in the next two months. One used donated bone from the fibular to brace the front of my neck. When that wasn’t quite strong enough, the other surgery harvested from my other hip and was used to further fuse the bones in the back. I was in a halo brace for 6 months that was screwed into my head.

Today the tumor still wraps around my carotid artery and shifts my airway, but I am doing well. However, in March 2013 we found out that my tumors do appear to be growing. They had been increasingly causing me more pain over the months since around the beginning of the year to the point I had to leave my job at the movie theater. I was put on three medications to help control the pain in August 2013. In September 2013 I was put on a clinical trial for my plexiforms. I was extremely lucky to be part of this trial, although it is scary to think I was on it because my tumors are in a bad place and [were] growing. In the almost 2 years of being on the trial, I had about 27% shrinkage.

In addition to the tumor in my neck, I also have tumors in my shoulder, side of face, and running up my scalp, some of them cause me frequent pain. We recently discovered that I also have tumors in both my upper thighs that need to be monitored. Over the years I’ve also been developing cutaneous (skin) tumors…especially on my torso.

I struggle with pain almost weekly because of the tumors but also from migraines, slight scoliosis, and spinal defect dural ectasia. Often, medication does not help my pain. My seizures (psycho-motor) are currently under control with medicine but occasionally I will have a “breakthrough” seizure which makes me sick.

I was also diagnosed when I was twenty as having a learning disability that affects my executive processing. It didn’t stop me from getting a college degree. I struggle with directions (esp. driving), anxiety, planning, and other simple tasks that people take for granted.

I’m living my life as normally as possible. Sure, I struggle a lot but I’m still a normal girl who loves to have fun. I just want to be a footprint in stomping out NF! 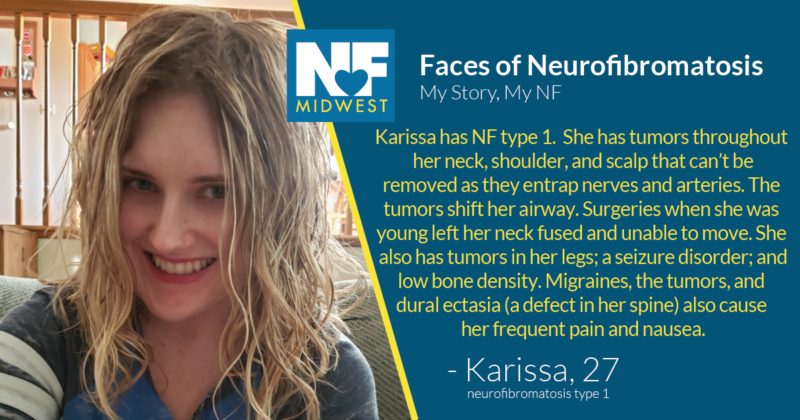