Evita – A Face of NF

My name is Evita Ali and I have NF1. I was diagnosed with neurofibromatosis when I was 30
years of age. All my life, since I was a child, and going to the doctor for various things, the
doctors always seemed intrigued with the amount of birthmarks I had. Not one doctor knew
anything, so we just summed it all up to I had a lot of birthmarks and since I didn’t have any
obvious issues, I must be fine. All I had were the brown marks, so, I and my cousins made a
game of it all, by counting them and to see who can count the most.
As I got older, still not having any obvious issues, I never gave it one thought at all. I began have
abdominal issues a lot when I was 28 years of age and needed to see a gyne doctor. So, as I
made an appointment to see my gynecologist, I arrived, and as I was being examined, she
started looking me over and asking questions, not related to my gynecological exam. She asked
me if I knew what I had, and I said “what”. She became intrigued and said she wanted to be a
dermatologist at some point before entering into med school and what I had looked familiar but
wasn’t sure, and felt I should see a dermatologist.

It was some weeks later and I arrived at the dermatologist office not knowing what to think or
what they may reveal to me. They brought me into the exam room and I waited patiently for the
doctor to arrive. His assistant, then the doctor asking me questions, they both seemed a little
too excited for me. He examined me and said, “I know what you have”; “you have
Neurofibromatosis.” I said, “What!! the heck is that, and what does this mean for me.” He
began to explain to me what I had and brought other intern doctors in to see what “it” looks like.
I agreed and the questions rolled in. So, now I know and of course and needed to know more.
The dermatologist referred me to a doctor who sees patients with Neurofibromatosis, and since I
was at the University of Chicago, that doctor was Dr. Tonsgard. Once again, there was a little
wait to see him, mainly because he sees children patients and a very busy doctor. I finally get to
see Dr. Tonsgard and his assistant and they both examine me and get my history. They begin to
tell me what to look for in the near future. I left there feeling somewhat uncomfortable and
upset that no one knew a dang thang and could tell me nothing all these years.

Here I am 50 years old, and can see the changes that have taken place physically place with me
over the years. So, let me also say that over the years, I always had physical issues that stemmed
from polyps, fibroids, endometriosis, and most recently stage 2, triple negative breast cancer.
My genetic testing for breast cancer showed that my neurofibromatosis had some cause.
I’m the only person in my family on my mother’s side that has neurofibromatosis. My mother
told me that my father’s mother had the same bumps as I. I’ve always felt alone with this
disease and never seen a black people (African American) with this disease, until some years
ago, but it was only in passing. Now, I’m only hoping for the best and that no more new
mutations as I call them appear. I need to get back to a doctor because it has been at least 15
years since I’ve seen a doctor for my NF1. I’m also glad that all my doctors are aware of this
disease and now look for any issues that may be attributed to NF. 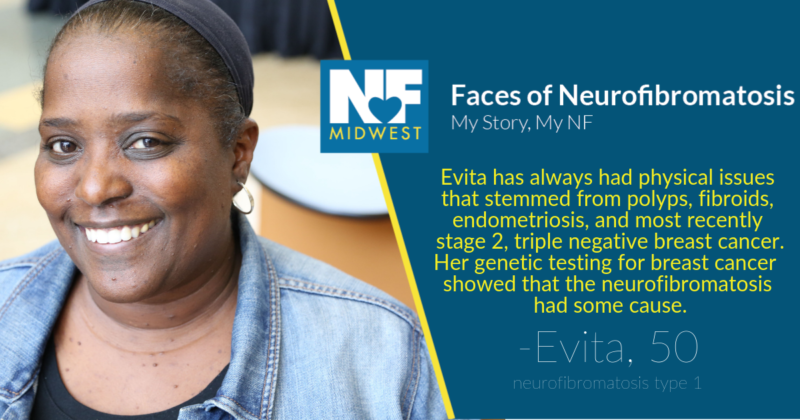 © 2021 Neurofibromatosis Midwest - non profit 501(c)(t3). Site Map - Privacy Policy
The resources on this site should not be used as a substitute for professional medical care or advice on Neurofibromatosis. Users seeking information about a personal genetic disease, syndrome, or condition should consult with a qualified healthcare professional.